Ka-shing in on both parties

The business pages today relate how Gordon Brown has recruited a group of 12 top business superstars to advise him on how the UK can increase its international competitiveness.

For a start, there's Microsoft's Bill Gates. The software monopolist currently faces a Eur2m a day fine from the European Union, which alleges non-compliance with a 2004 anti-trust ruling. But Gates will advise on ... competitiveness. Like, duh.

Then there's Lee Scott, chief executive of Wal-Mart. The world's biggest retailer is notorious for its anti-union stance. There's a post on the way its UK affiliate Asda recently copped a sizeable fine for its unlawful attempts to crush the GMB earlier on this blog.

But most shocking of the lot is the inclusion of Li Ka-shing. That's right, the same Beijing-linked Hong Kong ports baron who donated at least £1m to the Conservative Party under Thatcher and Major. Here he is, standing on the right of the picture and pressing the flesh with post-Tiananmen Square dictator Jiang Zemin. 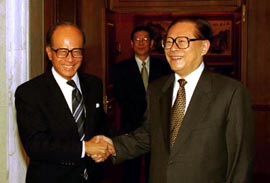 The gig with Brown bears witness to the rapidly burgeoning love affair between British multinational capital and Chinese Stalinism. Bear this alliance in mind next time you hear Blair claim he only backed the invasion of Iraq because he believes in democracy everywhere. One party states can be just fine and dandy sometimes, it seems.

And the moral of the story? In British politics these days, the same million pound bung seems to buy the permanent favour not just of one major party, but both of them.