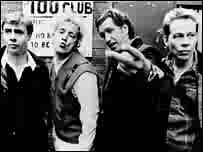 It’s 30 years on since the first Sex Pistols gig, and the BBC website does a round-up of reminiscences from the period, include Jean-Jacques Burnel from the Stranglers, Pauline Murray from Penetration, that bloke from Tenpole Tudor and Eddie from the Vibrators. None of them uses a current photograph, I notice. Wonder why that could be?

Fair brings the safety pin years flooding back. My GF of the period looked the spitting image of Pauline Murray, and dressed up like her, too. She sometimes used to get asked for Pauline’s autograph. Then she ditched me for Kettering Town’s centre forward. Sob.

I suppose no one ever forgets the time in their lives when they discover sex & drugs &amp; rock & roll. It is a period of heady firsts, after all, from first job to first kiss, from first joint to first demo.

In many ways, the late seventies were a pretty tough time to be a teenager in Britain. But the punk explosion almost made up for everything else.

On top of being the greatest youth movement ever, Punk was also relatively politicised. Not all of the politicisation was towards the left, either.

The Jam used to drape their Vox AC30s in Union Jacks and Weller boasted about voting Tory. Sham 69 flirted with far right support for a while, and Skrewdriver went on to do a damn sight more than that.

The Pistols touted themselves as anarchists, but still managed to sport swastika symbolism and come up with songs such as ‘Bodies’ and ‘Belsen was a gas’. Even the more comic book Ramones sung about being Nazis fighting for the fatherland.

But on the whole, the left won out. These were the years of Rock Against Racism, the Anti Nazi League and Youth CND, and bands like the Clash, the Ruts and Crisis helped win a generation of activists over to leftwing ideas. Great days indeed.