Peter Hain clearly wants his tuppence ha'penny worth - or as this is New Labour we are talking about, more like his £2.5m-worth - on the 'loans for lordships' debate. This is his observation about conservative calls for a cap on political gifts in today's Guardian:

'The Tories' cynical and sudden conversion on donations is an opportunistic trap to damage the historic link between the trade union movement and the Labour party.'

If anybody is being cynical and opportunistic here, it's not just the Tories but Hain himself as well. Thanks to New Labour, the relationship between Labour and the unions has been under sustained assault for more than a decade. 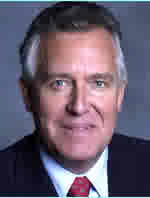 When cabinet ministers suddenly come over all palsy-walsy when discussing 'this great movement of ours' - TGMOO to the cognoscenti - then it's time to check the cutlery.

Tory assistance to damage the union link still further is surely surplus to requirements. It's not David Cameron that is calling for the union block vote at Labour Party conference to be cut from 50% to 15%, is it? It's Alan Johnson, a former trade union general secretary, displaying all the typical zeal of a Blairite neophyte.

The Times reported that story under the headline 'Labour plots to cut power of its union paymasters'. But somehow, the idea that Labour is now in the hands of 'big business paymasters' never gets a look-in.

With 1.5m public sector workers gearing up for strike action in defence of their pensions later this month, Labour affiliated unions really need to think again about funding an increasingly corrupt neoliberal party that begrudges some of society's hardest grafters early retirement on £30 a week.