Book review: 'After the neocons' by Francis Fukuyama 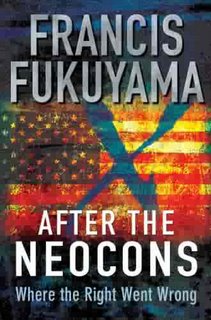 How ironic that Britain is only now developing its own indigenous neoconservative groupings - in the shape of the Henry Jackson Society and the Euston Manifesto - as the doctrine's sway is receding in its homeland.

And neoconservatism is declining in theoretical standing chiefly because it has been seen to fail in practice. The invasion of Iraq has patently not gone the way the Project for a New American Century thought it was going to go.

Leading neocon Francis Fukuyama tries to come to terms with this in After the neocons: America at the crossroads, and unlike some parts of the British centre-left, starts from a realistic rather than rose-tinted assessment of the situation on the ground following the fall of Saddam:

'By invading Iraq, the Bush administration created a self-fulfilling prophecy: Iraq has now replaced Afghanistan as a magnet, training ground and operational base for jihadist terrorists, with plenty of American targets to shoot at.'

The book is not quite a mea culpa. Fukuyama insists he was never foolish enough to back the war in the first place. But in classic Shirley Williams style, he insists that it is the party that has changed:

'I have concluded that neoconservatism, as both a political symbol and a body of thought, has evolved into something that I can no longer support.'

Instead, he tries to save neoconservatism from itself, proposing what he dubs 'realistic Wilsonianism' in its place. This boils down to a kinder, gentler neoconservatism, based on a foreign policy that concentrates onpromoting democracy by soft power rather than military hardware. It also takes pledges to work with, rather than against, international institutions.

Chapter two will be of particular interest to intellectual trend trainspotters, examining the roots of neoconservatism not just in the legacies of Leo Strauss and Max Shactman, but also in the work of Albert Wohlstetter and the groups around the magazines Public Interest and Weekly Standard. In particular, the Weekly Standard faction around William Kristol and Robert Kagan are fingered as the number one neocons advocates of war.

Fukuyama goes on to argue that political Islam is actually a displacement threat, appealing primarily to 'the same alienated individuals who in earlier generations would have gravitated to communism or fascism'. He also correctly observes:

'Western democracy will not be a short-term solution to the problem of terrorism. The September 11, Madrid, Amsterdam and London attackers lived in modern, democratic societies and were not alienated by the lack of democracy in the countries of their birth or ancestry.'

And against calls for a Muslim Luther, he points out again rightly that the Christian Luther did not preach liberalism and pluralism but intolerant religious fanaticism instead.

Where the Euston Manifesto seemingly appeal to the US to save the world for democracy, Fukuyama underlines the real limitations on its ability to do so.

'First, benevolent hegemony rests on a belief in American exceptionalism that most non-Americans simply find not credible. The idea that the United States behaves disinterestedly on the world stage is not widely believed because it is for the most the most part not true ...

'The second problem with benevolent hegemony is that it presupposes an extremely high level of competence on the part of the hegemonic power.'

That puts the matter rather politely. But 'nuff said, methinks. Finally, benevolent hegemony is impossible in domestic political terms. The US electorate just won't wear it. Together, the three points eloquently demolish a central tenet of neoconservatism in both its PNAC and Eustonite manifestations.

In short, Fukyama has moved on. It's sad to see Geras, Cohen and Johnson so hasty in trying to get on board an already sinking ship.