David Cameron and the New Conservatives 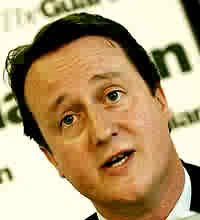 Good evening Middle England. Will you please give a big round of applause for Cameron’s Conservatives.

The changes currently emanating from Conservative Campaign Headquarters necessitate a rethink across the political spectrum. It would be intellectually lazy for the left to exempt itself from the task.

Yet many responses will be lazy. The trouble is, a lot of us have spent our entire political lifetimes in the certain knowledge of what the Tories stand for. Growing up in the 1970s and 1980s, we knew the script off by heart. Labour was the mass party of the working class.

As a student, I wrote long essays proffering Gramscian analyses of the exact composition of the Thatcherite historic bloc.

As a journalist, I sustained a minor cottage industry in populist denunciations of the Tories as a bunch of reactionary, racist, homophobic, authoritarian, narrow-minded, anti-European, gin-and-Jag belt golf-club bigots. It was easy copy.

And now, all of a sudden, the Conservatives insist they are not the nasty party any more. Rhetorically, anyway, the current process of rebranding sees them outflanking New Labour from the left on some questions. That would have been unthinkable at any other time in British political history.

Thus we have Cameron’s promise to ‘stand up to big business’. Talk of that nature would be a sacking offence for a Labour frontbencher. Not even the average trade union general secretary comes out with soundbites along those lines these days.

The Tories don’t have a convenient symbolic equivalent to Clause Four readily to hand. But the merest hint that big business is anything less than an untrammelled force for universal benevolence comes as close as it gets to flatulence in church.

Cameron - pictured above - even goes on to claim that ‘there is such a thing as society’. Such a jibe was obviously aimed at Margaret Thatcher herself. Unbelievable heresy.

‘Of course inequality matters. Of course it should be an aim to narrow the gap between rich and poor.’

The backstory here is that this is a gap that has grown since 1997, as the reportedly cerebral Letwin will be well aware.

Elsewhere, changes are coming thick and fast. There will be a policy commission on global poverty, complete with pensioned-off punk rocker Bob Geldof.

The editor of The Ecologist has been roped in to advise Cameron on environmental issues.
The new leader attacks gender differences in pay, and is demanding the selection of more women candidates.

Hell, the Tories are distancing themselves from some of their more odiously racist positions, and even appear finally to realise that the wilder theoretical constructs of neoliberalism are not necessarily applicable to the NHS.

At this rate, some of them might even be considered acceptable dinner party guests at polite north London home before too long. And not just in the hope that they’ll bring along a little something to dynamise the impact of the double espressos.

It’s been all talk so far, of course. It remains inconceivable that the Tories could ever sever ties with the bourgeoisie in the same fashion that New Labour has reduced its links with organised labour.

However, both parties increasingly seek to represent a broadly similar set of class interests.

But even while stressing Marxist ABCs here, it would be wrong to dismiss what the Tories are doing as no more than a change in the mood music for cynical vote-grubbing purposes.

Electoral politics can and do reflect demographic changes. New Labour is the living proof of that.

With even a partial follow-through from the hype, Mondeo Man, Worcester Woman and all the other alliterative archetypes of focus group legend may well switch sides once more. After all, aspirational cachet is traditionally a Conservative brand value.

Remember also that serious politicians do not lightly give speeches purposely designed to alienate core support.

Any more of this and Cameron could do for a whole cadre of ideologically-minded constituency activists what Kinnock did for their Labour equivalents in the 1980s. The far right is clearly hoping to recruit the outcasts.

Meanwhile, the electorate will be left with a political system based on three centrist parties, all divorced from any taint of class alignment, fighting a heavily nuanced battle centred on leadership personality and managerial competence issues.

Labour is still weighing up how to counter the change of tactics from the opposition. Probably the party is better off waiting until the confusion clears up.

Attempts to dismiss Cameron as ‘the same old same old’ are likely to miss the mark as widely as the Major government’s laughable initial efforts to brand Blair a closet socialist back in 1994 and 1995.

What is clear is that plenty of ground remains available for the political forces of the democratic left. Sadly, outside Scotland, it seems unable to take much advantage of the opening.