How leftwing is Oliver Kamm?

Let's return to theme of what it means to be rightwing or leftwing these days, following my quick post on the topic about a week ago. 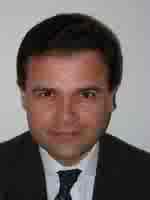 It seems that Blairite blogger and Times columnist Oliver Kamm - pictured left - has rather taken umbrage at Peter Wilby's suggestion that, while claiming to be leftwing, he has no discernible leftwing views:

'I ... claim to be left-wing, for the straightforward reason that it's true ... I support economic redistribution (though on grounds of autonomy, not equality), progressive taxation and a welfare state of very roughly its current scope and size.'

Except those aren't necessarily leftwing views at all, are they, Oliver? Let's take redistribution, for instance. Another Oliver earlier this year came out in favour of redistribution. What's more, he explicitly backed the notion on grounds of equally and not 'autonomy', whatever that means.

The other Oliver's name is Oliver Letwin, and his job is co-ordinating policy for the Tory Party. No marks out of ten there then, Mr Kamm.

Nor is progressive taxation a particularly radical idea, either. All three mainstream UK parties favour it, with those oh-so-daring Lib Dems even arguing for a 50p band. True, shadow chancellor George Osborne has flirted with notion of an east European-style flat tax. But as Michael Portillo argues persuasively, that idea goes so strongly outside the consensus that it is highly unlikely ever to make official Tory policy.

The welfare state reached its current scope and size only after three decades of neoliberal rollback under successive Labour and Tory governments. No-one outside the free market fundamentalist right is calling for it to be drastically curtailed. And since when was uncritical support for the status quo regarded as radical, anyway?

It looks awfully like Wilby's assessment stands. So what, then, does being leftwing entail? Writing on this blog in another context, I expressed it like this:

'We want to end exploitation, oppression, injustice, inequality, poverty, hunger and violence. That is why we are the leftists.'

The only way we can get there is by getting rid of capitalism. Somehow, I don't see our friend OK signing up to a proposition like that.