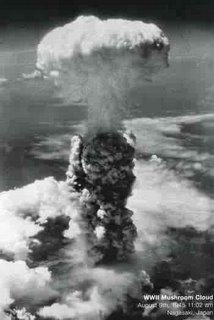 A year or two back, it was already clear that the future of Iran hinged on two interlinked power struggles: that between the pragmatists and the neoconservatives in Washington, and that between the reformists and the hardliners in Tehran. Frighteningly, the bad guys have scored a double victory.

Khatemi failed in his quest to liberalise the Islamic Republic without undermining its theocratic basis, while re-establishing economic relations with the West to attract investment into the oil and gas sectors. The holocaust denier Mahmoud Ahmadinejad is now in his place.

Over at the White House, Dubya has been re-elected. Now a couple of leading US publications report that Bush is planning a full-scale air campaign against Iran, possibly including tactical nuclear weapons against selected targets.

‘Current and former American military and intelligence officials said that Air Force planning groups are drawing up lists of targets, and teams of American combat troops have been ordered into Iran, under cover, to collect targeting data and to establish contact with anti-government ethnic-minority groups.’

In a similar vein, the Washington Post has this to say:

‘Although a land invasion is not contemplated, military officers are weighing alternatives ranging from a limited air strike aimed at key nuclear sites, to a more extensive bombing campaign designed to destroy an array of military and political targets.’

Both reports indicate that many senior officers consider such ideas crazy, and there are likely to be resignations over the issue.

Even looking at it purely from the narrow standpoint of the US national interest, the nay-sayers are almost certainly right. If the situation in Iraq right now doesn’t constitute a civil war, a nuclear strike against Iran would inflame the shia population to the point where it most certainly would.

Maybe it's all a cunning bluff on the part of Washington, of course. If so, it is a total betrayal of Iranian democrats. Such hawkish postures guarantee continued mass support for the regime, and that no one will listen to calls for reform.

It will be interesting to see what the pro-war left makes of this. Probably the dominant reaction at present is to dismiss Hersh as a fantasist. That hardly washes. He is one of the top journalists in the US, with a reputation to lose if he puts his by-line to complete twaddle.

Hersh has - they will inevitably point out - made earlier predictions that US bombs would start to fall on Iran. They didn't pan out. But that does not necessarily invalidate his reports. It is entirely possible that such plans were discussed, but a decision was subsequently taken not to proceed.

Were an attack to come about, exactly how would Hitchens, Harry’s Place, Aaronovitch and Cohen make the case that nukes are a legitimate weapon against ‘islamofascism’? Such is the radioactive road to liberation, I guess.

What about the British government response? Today’s Financial Times talks of a split between Blair and Straw on this issue.

Straw has repeatedly ruled out what literally is ‘the nuclear option’. On Sunday he commented: ‘There is no smoking gun, there is no casus belli … The idea of a nuclear strike on Iran is completely nuts.’

But the FT adds that Blair has never overtly rejected the idea of nuking Tehran, and has even ‘shown signs of exasperation with Mr Straw’s cautious approach’.

Of course, Straw will be well aware of the need to pacify anti-war Labour MPs, a substantial minority of parliamentary Labour Party.

In a sense, Jack is right. Yes, a nuclear strike on Iran would be completely nuts. But the Bush administration is just about loopy enough to do it.