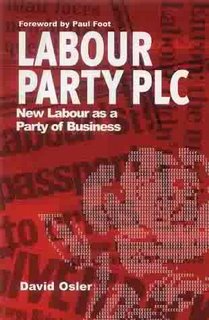 Norton Healthcare - the largest manufacturer of generic drugs for the NHS - has reached an out of court settlement with the Department of Health over claims it participated in an alleged price-fixing cartel defrauding the health service of more than £150m.

The company agreed to pay the NHS £13.5m for claims relating to generic drug price fixing, as has been widely reported.

But interestingly, while all this was going on, Norton was headed by a man linked to both the governing party in apartheid South Africa and yes, you've guessed it, Labour Party plc:

‘Isaac Kaye, chairman of pharmaceuticals manufacturer Norton Healthcare, has switched his political allegiance away from the parties that ruled that country under apartheid and towards New Labour. Presumably that must be considered progress of sorts.

‘An Irish citizen entitled to vote in the UK, Kaye first came to Britain from South Africa in 1985, becoming the major shareholder in a company called Harris Pharmaceuticals. Five years later Harris was sold to Ivax Corporation – a Florida-based holding company with subsidiaries involved in the research, development, manufacture and marketing of both branded and generic pharmaceuticals worldwide – and renamed Norton.

'Kaye did rather well out of all this. The £23m he got from the sale now resides in a Channel Islands trust fund. Moreover, Kaye got to stay on as Norton’s chairman, and was also appointed deputy chief executive of Ivax. His stake in the parent company is thought to be worth a further £12m.

‘Norton is now the number one supplier of generic medicines in Britain. It is also one of six companies raided by police investigating an alleged £400m fraud on the NHS in April 2002. Claims of overcharging, and possibly even price-fixing collusion, are at the centre of the probe, although the investigations may of course give Norton and the other companies a clean bill of health.’

[Yes, that last sentence was inserted on the suggestion of a libel lawyer – DO]

‘Kaye was a high-value donor to New Labour in 1997, 1998 and 1999. In the latter year, his support reportedly totalled £100,000. He also backed Frank Dobson’s ill-fated bid to be elected mayor of London in 2000 with a cheque for £10,000. Dobson is, of course, a former Secretary of State for Health who ordered NHS doctors to use generics wherever possible.

‘Generic medicines are essentially cheaper substitutes for expensive products developed by the big pharmaceutical multinationals. But Norton has in recent years consistently squeezed the highest possible profits out of the NHS, frequently hiking the price of its products to just below those of the copyright equivalents.

‘In 1998, a pack of Norton thyroxine tablets – a treatment for goitre and thyroid cancer – cost the health service £6.84. The following year, the price rose to £44.89, negating much of the savings that would otherwise have been made. Such tactics saw Ivax’s profits rise over 70% in 2000, despite a 12% decline in turnover.

‘Other of Norton’s business activities in Britain have given cause for concern. In 1996, for instance, it was censured by the Association of the British Pharmaceutical Industry for offering rather enticing incentives, ranging from Marks & Spencer vouchers to mountain bikes, to high street chemists that ordered its products.

‘Meanwhile, Kaye has refused to recognise trade unions, arguing that they are ‘not in line with company philosophy’.17 In May 2000, a Kentucky judge ruled that Norton unlawfully violated the rights of its nurses at one of its US hospitals, by barring them from union activity in their own time. This was held to be in violation of the National Labor Relations Act.

‘Before he became a chequebook-wielding New Labourite, Kaye enjoyed friendly ties with politicians back in South Africa, where he spent much of his life. Between 1977 and 1982, he served on the board of South African Druggists, a major supplier to the country’s healthcare market. Company documents from the period show that SA Druggists subsidiaries offered lavish gifts to hospital administrators and other medical figures.

‘These included cars, payment of credit card and garage bills, swimming pools and trips to Europe and the Far East. The comparison with the tactics later adopted in the UK is obvious.

‘SA Druggists executives were also seconded to assist the election efforts of the Afrikaaner-led National Party. Kaye is not likely personally to have supported the racist party.

‘But South Africa’s erstwhile National Party minister for health Dr Lapa Munnik – an apartheid stalwart who threatened to close Catholic schools if they dared to admit non-white pupils – claims that Kaye offered him the use of cars to transport supporters to the polls at a crucial 1979 by-election. Another National Party candidate remembers Kaye as a ‘substantial’ backer.

‘These claims are contested by Kaye’s lawyer, who insists that the only
South African party his client supported financially was the liberal opposition Progressive Party. Even so, it was admitted that Kaye did back one National Party candidate on grounds of childhood friendship.

‘Evidence gathered by the police during the April raids is being considered by the Serious Fraud Office. There is no suggestion that Kaye was personally complicit in or even aware of any malpractices. But if it does emerge that Norton has a case to answer, this could certainly prove a political news story worth watching.’