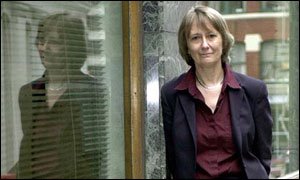 A report from Anne Owers - Britain’s chief inspector of prisons, pictured right - has blasted outsourcing major Serco for the 'particularly squalid' conditions at the privatised jail it runs in Doncaster:

'Some cells, especially on the young prisoners' wing, were dirty and festooned with graffiti.

'These were examples of an institutional meanness which was also reflected in the practice of making prisoners pay to change the PIN phone numbers they needed to contact relatives, and in the fact that no unemployment pay was provided to those prisoners for whom no work was available.'

Serco, of course, is right up there with the likes of Capita in raking in huge profits from running what should be public services. Profits rose 22% last year to £77.9m.

I fully accept that prison ain't supposed to be fun. But does this country really want a prison system so ghastly that every year more than 100 people take their own lives in preference to finishing their sentences? What most inmates really need is educational opportunities and drug rehabilitation.

Once upon a time, comments like that would be enough to condemn anybody making them to outcast bleeding heart liberal status. Not any more. Even rightish Tory Edward Garnier, his party's prisons spokesman, is publicly speaking up for a more enlightened approach.

Not so New Labour. In opposition, of course, the party opposed prison privatisation resolutely. As home affairs spokesperson, Jack Straw declared it ‘morally unacceptable for the private sector to undertake the incarceration of those whom the state has decided need to be imprisoned’.

Straw had, he wrote in the Prison Officers’ Association journal, ‘a fundamental objection to prisons run by the private sector . . . We cannot break contracts that already exist. But we should certainly make no new ones, and within the existing budget, shall take back into the public sector the privatised prisons as soon as contractually possible.’

Within one month of becoming Home Secretary, Straw agreed to sign prison PFI contracts already in the pipeline. The following year, he began to sign new contracts.

So much for New Labour’s fundamental objections. Politicians break promises all the time …but rarely so brazenly and with such alacrity. Along with the many Tory ideas they have simply taken over, they now appear to believe that 'prison works'.