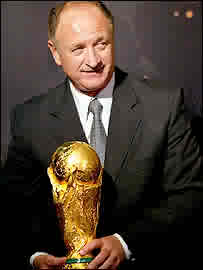 'Scolari is by nature remarkably open. He will hold court on such subjects as the fact that he tells his players to commit fouls, his admiration for General Pinochet or his prejudice against homosexuals. '

Great. A thuggish military dictator-worshipping homophobe. But as I'm a revolutionary defeatist on football matters, his appointment will simply offer another reason to hope England lose.

The comments box is open ...