The semiology of revolutionary graffiti 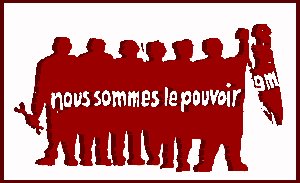 The French have had hundreds of years experience in coining catchy revolutionary slogans. Their graffiti, like their wine, is arguably the best in the world. From Liberté, égalité, fraternité to Sous les pavés, la plage and Nous sommes le pouvoir ... how beautifully the catchphrases trip off the tongue.

In addition, France also does a nice line in postmodern philosophy. So here's an irresistable story that brings out both these essential aspects of the national character.

It all begins with a recent student occupation at the Ecole des hautes études en sciences sociales in Paris, where Jacques Derrida himself once taught.

Les flics eventually regain possession, and work commences on the thankless task of clearing up the empty pizza boxes, fag ends and beer cans. But one of the academics is suddenly enthralled:

'"I realised straight away that there were a number of extremely interesting things," said Béatrice Fraenkel, who teaches semiology. "They had managed to cover everything - walls, floors, ceilings - in writing."

'Some of the "artwork" is striking: across a clock the words "time is an invention of people incapable of love" had been scrawled.'

Mrs Fraenkel has taken 600 photographs and made 100 pages of notes, and assigned a team of sociology researchers to begin classifying the graffiti.

In 1983, I was one of the ringleaders of an occupation at City of London Polytechnic. If we'd have made a mess, the provost would have sued the student union for the cost of repainting the place. Trust the French to do things in style.