Why I don't support George Galloway and Respect

After having polemicised against the Euston Manifesto over the last week, I'd better make it crystal that I am not now and have never been a fan of George Galloway, either. It is this unique ability to piss off all sides equally that makes me such a popular fixture in leftwing journalism, I guess. This article originally appeared in the 6th November 2003 issue of Solidarity, published by the Alliance for Workers' Liberty. I stand by it, despite the subsequent arrival of GG in parliament. I'll just add one footnote: it's interesting how both Respect and the EM are conceived as popular fronts. That's why they are both mistaken projects. 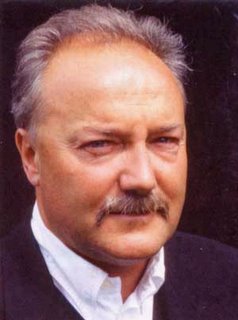 Revolutionary socialism in England signed its own suicide note last week, and it came in the unlikely shape of a billet-doux to George Galloway. The overwhelming majority of the far left south of the border has lined up behind a project that seeks not so much to put the working class in the saddle, as Orwell expressed it, but to put a £150,000-a-year Saudi-bankrolled crypto-tankie into Strasbourg. Bang goes the Trotskyist neighbourhood.

Although those of us within the Trot loop were well aware of what was going on, the formal announcement came at last Wednesday's 'British Politics at the Crossroads' rally in London. I haven't been to a political gathering at Friends Meeting House with such a palpable buzz about it since the Benn leadership rallies of more than 20 years ago. The venue, which holds 1,200 people, was completely full. Yet I left with a heavy heart.

At a stroke, almost a decade of hard work to bring together the revolutionary left behind a cohesive unity project somehow seemed to unravel in the course of a single evening. It will take years to recover from this setback, if indeed we ever do.

Some of the people pushing this course of action argue that this represents the best chance for a generation to escape from the 'left ghetto'. Isn't that what we all want? Well, tickets out of the left ghetto have always been available. But they have tended to be one way tickets. Ask any number of recent cabinet ministers.

To use a religious analogy - and given the likely inclusion of Muslim activists on the Galloway/SWP slate, that surely cannot be inadmissible - I am reminded of the Bible's account of the temptation of Christ by the Devil. All this can be yours, if only you bow down and worship me. It's just that this time Lucifer isn't even offering anything that is particularly worth having.

I don't suppose many people will much care, other than perhaps to snigger over the decision to line up our limited tanks behind Gorgeous George. Trotskyism tends to be about as popular with the rest of the left as a professional seal-clubber at an Animal Liberation Front convention. But I do. Passionately.

As a Trot, or sort of Trot, if only by dint of a misspent youth in the Fourth International, I have always defended the movement. The values that it stands for somehow always managed to outweigh its all-too-frequent sectarian stupidities. Call it, as the now disused political shorthand had it, the Vision Thing.

We want to end exploitation, oppression, injustice, inequality, poverty, hunger and violence. That is why we are the leftists. Communism is indelibly tainted by totalitarianism. And how many Labour MPs does it take to change a lightbulb? Reformism never changes anything, comrade.

Trotskyism's job is to inject the necessary corrective of socialism from below into the workers' movement, offering a Marxist strategy solidly centred on the self-activity of the working class as the agent of revolutionary social change. And if it doesn't do that, well, what's the bloody point?

After decades of isolation, the Scottish Socialist Party, and the LCR/LO bloc in France, have proven that it is possible to win significant support for such politics. But instead of following their example, the SWP has decided the English far left's job is simply to provide the activist backing for a bunch of political losers in next year's euro-elections.

The slate will probably be known as the 'Peace and Justice' ticket, and as Galloway makes clear on the al-Jazeera website, its politics will be sufficiently diffuse to appeal to liberals and conservatives. Environmental journo George Monbiot and Muslim activist Salma Yaqoob seem to have signed up for the ride.

Luckily, this time Gorgeous George will be unable to tap his more unsavoury buddies in the Middle East for the funds to underwrite the lost deposits, something that would be illegal under electoral law. Saudi businessmen are not usually noted for financing European socialists, although in George's case they have in the past made an exception.

It's not even that I'm hung up on Trotsky's textbook critique of thirties-style popular frontism that this exercise represents, writings that the more orthodox brethren of Workers' Power and the like are now certain to dust off. This is a different period, and different tactics are not necessarily wrong in principle. It's a tactical call. But it's a wrong tactical call.

A one-off electoral coalition led by a vicarious Arab nationalist, a Guardian columnist and a religious obscurantist on a second-rate pseudo-Green programme is hardly likely to prove that popular. Yet I guess 95% of the existing far left will be swept along. Are there really only a few hundred of us who can see what is happening? Again, I guess so. I've never felt more politically isolated.

I didn't take detailed notes of Galloway's speech. It is not even that there was much wrong with his critique of what New Labour is and what New Labour does. It's easy enough to find a far-left audience's clitoris simply by denouncing everything from top-up fees and foundation hospitals to police racism and, inevitably, the war on Iraq. Fine. But we can all make speeches like that.

Two aspects do stick in my mind. The first is his bizarre use of the chorus from the New Seekers' early seventies easy listening classic 'Look What They've Done to my Song, Ma' as some sort of leitmotif for the crimes of Blairism. If that's his taste in music, that alone is a good enough reason not to give the man your vote.

Second was the warmed-over old school Communist Party terminology Galloway employed, which to the trained ear reveals everything about the very manner in which he conceptualises political strategy. What was being launched that night, he told us, was 'a popular unity movement'. This would be made to bring together all 'progressive forces' because 'the people, united' will never be defeated. Cue uncritical applause. Cue standing ovations all round. Don't mention the r-word. And don't expect any criticism in next week's Socialist Worker, either.

Being a fairly humble sort of chap - no, really! - I earnestly tried to convince myself that I must be the one in the wrong. The infectious enthusiasm of almost everyone else in the crowd somehow just had to be right. Sadly I still haven't succeeded.