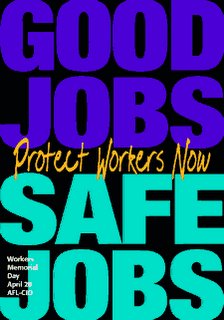 April 28 - this year as every other year since 1985 - is Workers' Memorial Day, an occasion the British labour movement really needs to mark more strongly than it usually does.

The event is designed to highlight the shocking death toll regulary seen in workplaces around the world. According to statistics from the International Confederation of Free Trade Unions - almost certainly an underestimate - 200,000 workers per annum die on the job. Many more are injured, often seriously.

That is equivalent to an attack on the scale of 9/11, perpetrated against the working class every single week of every single year.

We are currently in the grip of a war on terrorism. But the idea of a war on negligent employers somehow doesn't make it onto the political radar screen. Bosses continue - quite literally - to get away with murder.

Unions in Britain have been pushing for adequate legislation on this one for around 40 years. The Zeebrugge and Piper Alpha tragedies of the Thatcher period served to put the issues into even sharper relief.

But most deaths occur in ones and twos. Even without any spectacular accidents, there were 2,157 workplace deaths in Britain in the five years to 2004.

Labour has promised to do something about the scandal ever since the early 1990s. Its 1997 manifesto promised legislation on corporate manslaughter. But subsequent delay and prevarication make the ban on foxhunting look the very model of alacrity.

Tentative proposals have been advanced several times, but still nothing has been done. Thankfully, there are recent reports that draft legislation is in the offing. About bloody time.

If company directors can be prosecuted for dodgy book-keeping, why not for negligence that leads to somebody's death? Or is the sanctity of accounting standards worth that much than a human life?