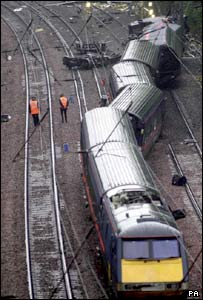 Balfour Beatty and Network Rail were last year given record fines totalling £13.5m for their role in the Hatfield rail crash - pictured left - of October 2000, in which four people died and over 100 injured.

Mr Justice Mackay described BB’s work as ‘the worst examples of sustained industrial negligence in a high-risk industry’ he had ever seen. So much for the alleged superiority of the private sector.

But both companies were acquitted on some charges, and applied for costs. The outcome? A taxpayer-funded handout of £20.9m.

This just three days after revelations that four Network Rail directors have copped bonuses totalling £1.1m, even though one train in eight runs late.

Privatising British Rail is one of the Tories’ biggest mistakes. Not taking it back into public ownership is one of New Labour’s.