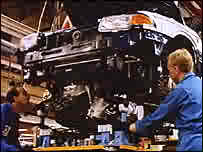 What the BBC doesn’t add is that what these men and women have done is actually illegal under Britain’s employment laws, which Tony Blair happily boasts are ‘the most restrictive on trade unions in the western world’.

Wildcat strikes are a rational response to wildcat management. Unilateral attempts to impose major job losses are not acceptable. Employees should be able to negotiate in good face, with an employer that respects their rights and concerns.

Sadly, British unions have become marginalised, and are now little more than one lobby among many others, with an auxiliary role of unpaid health and safety inspectors.

A sustained struggle to force the the scrapping of successive rounds of both Tory and New Labour legislation should be a top priority for the British labour movement.

A body called The United Campaign to Repeal the Anti-Trade Union Laws does exist. That its website does not appear to have been updated since September 2000 is a pointer to how bad things are just now.