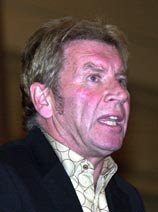 Alec McFadden - one of Britain's most well-known leftwing union activists, pictured left - has been subjected to a horrific violent attack right on his own doorstep. A report in the Liverpool Echo last Thursday states:

'A leading trade unionist was slashed in a knife attack in front of his two young daughters in their Merseyside home.

'Anti-racist campaigner and left wing activist Alec McFadden was almost blinded in the attack, and was cut in his head, arms and wrists as he tried to fend off the knifeman.

'His daughters, aged nine and 13, watched in horror as he was slashed with a craft knife, spraying blood on the door and hall of his Wirral home.

'The 59-year-old believes racists are behind the attack, as he has received death threats before. He said: "He missed my eye by half an inch. The doctors say I am lucky."

'Mr McFadden is president of the Merseyside Trades Councils and a champion of minority groups.'

I'm sure many readers will join me in wishing Alec a speedy recovery.