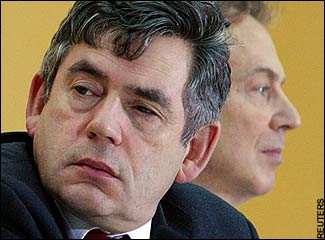 ‘Orderly transition’ seems to be the latest buzzword in the Labour Party. In plain English, the catchphrase translates to ‘Blair out! Brown in!’

This blog has already reprinted a Socialist Campaign Group statement, making it clear that the Labour left will mount a leadership challenge this year unless the prime minister steps down.

Now the press is full of speculation that around 75 Brownite MPs are circulating a draft letter calling on Blair to name the day he quits.

What the Guardian describes as 'a version' of this document is already online at the website of Compass, the Brownite pressure group, although Labour sources I talked to today tell me that the journalist who wrote the story may have willingly been sold a pup on this one.

But whatever form the final wording takes, there is no doubt that the discontent in the Parliamentary Labour Party is both serious and widespread.

So what tactics should the Labour left adopt? If, as now seems likely, the Brownites force a leadership contest this year, by all means let them take on the legwork.

I presume that there is already an understanding - either tacit or explicit - that the Campaign Group will vote the right way, if and when the no confidence motion comes.

The bottom line is this. When the leadership vote finally arrives, the Campaign Group absolutely must make sure it stands a candidate.

Simply to rubber stamp the replacement of Blair with Brown, without seizing the chance to put an explicitly socialist case to the labour movement, would be a major mistake.