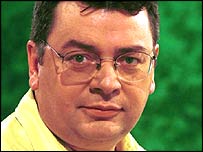 'I could vote for David Cameron,' writes David Aaronovitch. And in those six words, the one-time eurocommunist becomes the latest ostensibly radical commentator to come up with a half-arsed justification for voting Tory.


It's not that he's moved right, of course. No, no, no. Certainly not. What you have to understand is that the very terms 'left' and 'right' no longer have any meaning. Hardly an original Aperçu, but hey, let that slide.

In Aaronovitch world, that hoary old paradigm has been replaced by a division between 'progressives' and 'reactionaries'.

And gosh, here's a thing. 'Progressives' include the New Labour leadership, the Orange Book Lib-Dems and the Notting Hill Set Tories. Or - to look at it another way - the neoliberals in all three parties.

Indeed, Aaronovitch even gets in a snide dig at those dinosaur lefties who still consider neoliberalism something to oppose, rather than to glorify.

After all, if the word simply describes 'flexible labour markets, movement of capital etc' - and that's what Aaronovitch explicitly maintains - then what's not to like?

Trouble is, it means a hell of a lot more than that. Anyone even momentarily convinced by the pundit's reasoning could do worse than read David Harvey's stunning recent book 'A Brief History of Neoliberalism'.

Harvey brilliantly dissects the doctrine and illustrates how it boils down to a twin-track project, dedicated to the restoration of both the power of the ruling elites and the conditions for capital accumulation.

Emasculation of the power of organised labour is perhaps the key precondition for its success. The genuine left still sees socialism as the self-emancipation of the working class. Proponents of neoliberalism - however you want to slice it, and whichever party leader acts as its figurehead - constitute the 21st century right.

I don't know what they taught 'em in the CPGB in the 1970s. But elementary class politics does not seem to have been on the cadre school agenda.

• In an interesting aside, Aaronovitch also asserts that 'reds' of old were 'turned on by women with peace symbols painted on their bare breasts'. I know it's whatever floats your boat, Dave. Just don't presume to speak for the rest of us, you old hippy.