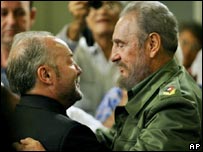 In an interview with GQ magazine - extracts available on most main news websites - George Galloway was asked:

'Would the assassination of, say, Tony Blair by a suicide bomber - if there were no other casualties - be justified as revenge for the war on Iraq?'

'Yes, it would be morally justified. I am not calling for it - but if it happened it would be of a wholly different moral order to the events of July 7. It would be entirely logical and explicable. And morally equivalent to ordering the deaths of thousands of innocent people in Iraq - as Blair did.'

On any kind of rational socialist calculus, the assassination of individual politicians is indefensible in a democracy. Yet here in Britain, the tactic has sometimes been tried. Sometimes it has even succeeded.

I remember how shocked I was on being woken by a radio alarm one morning in 1984, and hearing that the IRA had narrowly failed to take out Margaret Thatcher and a fair number of her cabinet in the Brighton bomb. One MP and four other people died.

Airey Neave - a close associate of Margaret Thatcher - was killed by an Irish National Liberation Army car bomb in 1979. Two years later, the New Statesman carried claims that at the time of his death, Neave himself was plotting the assassination of Tony Benn.

In 1971, an anarchist grouping bombed the home of Robert Carr, a Tory employment minister. In 1991, the IRA launched an unsuccessful mortar attack on Ten Downing Street. Neither incident saw loss of life.

How did the far left respond in such cases? Mostly with mealy-mouthed apologetics. You probably know the formulas. 'We do not condone, but refuse to condemn ...', 'X is the real terrorist', 'unconditional but critical support for ...'.

Some of them I trotted out myself in the 1980s, and now regret it. They will no longer do. I still believe that the war on Iraq was - and remains - morally wrong. The assassination of the prime minister would be morally wrong, too. Terrorism always is.