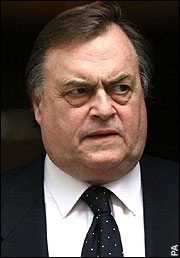 Word up is that Number Ten wants the Croquet Kid - pictured left - to stay on as deputy prime minister for as long as Blair remains in the top job. Not that much longer, in other words.

Predictably, the DPM wannabes are already lobbying for the position. Names that have emerged so far include Harriet Harman, Alan Johnson, Peter Hain and Jack Straw.

All presumably still see themselves as somehow ‘soft left’. But all have pretty much done Blair’s bidding while in the cabinet, although admittedly Hain has from time to time offered up a few extremely guarded criticisms of the boss.

I guess the not-so-fab four are all pretty much of a muchness from the point of view of the left. But I can’t think of any Campaign Groupies in a position to mount a credible challenge. Anybody got any ideas?

‘The list of responsibilities undertaken by his department of nearly a decade reads like a roll-call of failure, with Labour's greatest betrayal - the refusal to provide enough adequate housing for the ordinary working people he says he represents - at the very top.

‘The progress of his party while he had been its deputy prime minister - it has haemorrhaged members as quickly as it has guiding principles - is testament to his uselessness as a standard-bearer for "Old Labour" values.

‘If anything, in fact, he has been New Labour’s willing decoy – mouth stuffed with gold, he has stood around for years pretending to represent the values of the "working class’, while actually providing nothing more than a barely adequate smokescreen for its pauperisation, ridicule and destruction.’

Yep, that just about sums it up. Labour Briefing used to run a regular profile of leading Labour politicians under the title ‘class traitor of the month’. If they ever in future run a poll for class traitor of the decade, the competition would surely be stiffer then what Ms Temple referred to as her lover’s ‘cocktail sausage’ following an ingestion of viagra. But I know who I’d nominate. Other suggestions in the comments box, please.