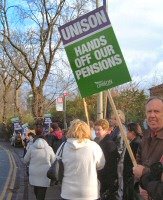 New Labour’s proposals to raise the retirement age – announced today - will not affect anyone currently over the age of 47. I am 46, so I will be losing out.

Now, as it happens, I wasn’t reckoning on stopping work at 65, anyway. It is almost certain I won’t be able to afford such a luxury.

The combined effects of London’s overpriced housing, and a relationship that didn’t work out, mean I still have a hefty mortgage that won’t be paid off until I am at least 66, probably even older.

I just hope my health holds up, and that freelance openings for doddery old alcoholic hacks are still there come 2026. Otherwise I’m in deep trouble.

Effectively, I’ve just had a year’s-worth of the pension entitlement - paid for by my National Insurance contributions since 1976 - taken away from me. And it's not even as if the pay-back will be a guarantee of enough to live on. Thanks a bunch, guys.

Britain could afford roughly adequate state-funded pensions in 1945. It could afford them in 1909, come to that. Why not now?

‘Ever since Labour came to power we have been calling upon the government to address the scandal of the break of the earnings link.

‘But this compromise deal between Blair and Brown is too little too late. It does nothing for today's pensioners and will leave millions dependent upon means testing for years to come.

‘We are facing a future which will see some people retiring in comfort with substantial private provision, while millions of others will be working till they drop.’