Metronet: no way to run a railroad 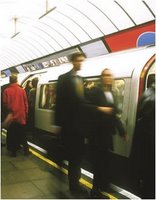 Nine out of ten Londoners didn't want tube privatisation. New Labour gave it to us anyway.

Maybe one of the factors that persuaded them to do so was the lobbying efforts of the firm Lexington Communications. The company was founded by Mike Craven, a former researcher for John Prescott, and briefly during 1998, Labour's acting chief press officer.

Metronet is now responsible for track maintenance on two-thirds of London's tube network.

So how well is it doing? Well, since you ask ... it's putting lives at risk:

'The main private contractor on London's Underground is not working hard enough to improve its performance, the network's operator has said after rail safety inspectors ordered Metronet to improve track on the District line.

'London Underground Limited, the publicly-owned company that operates trains and staffs stations on the Underground system, was speaking after a day when trains on parts of the network maintained by Metronet were delayed by speed restrictions necessary because the private consortium had not treated track correctly after maintenance work.

'The track had not been correctly stretched - a process known as stressing - after being put in place, and there were fears it could buckle in yesterday's heat and cause a derailment.'

This isn't the first safety lapse on Metronet's part. The company was also implicated in derailments in Camden Town in 2003, which saw seven people injured, and White City in 2004.

Unusually enough for a resident of this big city, I live close to my work, and my watering holes and jazz clubs of choice are either in walking distance or on a convenient bus route.

I probably only have to use the world's most expensive - and probably most filthy - underground network once or twice a month. Millions aren't so lucky.

London needs a safe and cheap tube system. Neither New Labour nor its mates in the private sector can deliver on that.