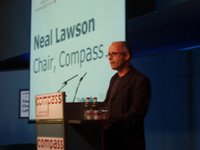 This is one of the deftest instances of repositioning I have seen in a long while. Neal Lawson - pictured left - clearly wants to ditch his image as a two-bob New Labour influence peddler and re-emerge as the coming man of a regenerated democratic socialist politics.

That's the best reading I can put on his op-ed contribution to the Independent today [subscription required], written by the chairman of Labour pressure group Compass himself:

'The problem with New Labour is that it is neither new enough nor Labour enough. It isn't true enough to our core values of equality, liberty and solidarity. But neither is it sufficiently in tune with the times. Blairism is stuck in the groove of 1994 when the world has moved on.

'Attempts to paint Compass into an "Old Labour" corner just won't wash. Yes, we believe in the values of equality, liberty and solidarity - but we are the modern left.'

It's perhaps strange to see a 'modern left' define itself by slightly rewording slogans from 1792. But such semantic quibbles aside, the piece as a whole rates as one of the sharpest critiques of New Labourism I have ever read from the pen of anybody who was once part of 'The Project'. What's more, the presumption has to be that the article would not have been written without the approval of Lawson's mentor, Gordon Brown.

Given such a political DNA, the piece is not without one or two passages of astonishing arrogance. For instance, the author seems to believe that Blair is only clinging to office so that he can frustrate the knavish tricks of Lawson and his pals:

'Ultimately Mr Blair wants to stay in power for long enough to entrench his commercialisation agenda and stop the democratic left politics of Compass flourishing.'

Yeah, right. I'm not sure that consideration is top of the PM's list of concerns, Neal. But congratulations on sticking the boot in anyway, kiddo.