The other Hitchens brother on Iraq 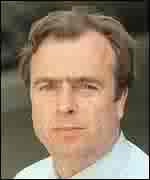 'Here is an imagined conversation between a normal human being and one of those people who still thinks our troops should be in Iraq,' begins the latest post on Peter Hitchens' blog. Ooooh, bi-iii-tchy! You can almost physically feel the sibling rivalry seeping off the screen.

But his argument loses much of its intellectual credibility on account of the following rather elementary blooper:

Q: ... Why is there a civil war if it's a democracy? Surely the whole idea of democracies is that the people's will can be expressed without violence?

A. Er, yes. But we did not foresee the resentment of the Sunnis at being ruled by the Shia minority they used to control.

Like, duh. What's the betting he'll reword that bit as big bro points it out?