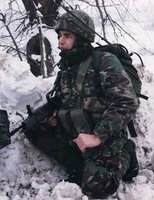 A group of British military personnel - led by officers - have formed some sort of quasi-union counterpart to the Police Federation:

'The British Armed Forces Federation’s leadership is meeting in private today in Wiltshire to discuss how to recruit thousands of members across the armed forces.

'The body will provide legal and moral support to soldiers in dispute with their commanders and lobby for better equipment and medical back-up for those in the front line. However, like the Police Federation, it will not take its members out on strike.'

Most readers will know the classical Marxist line on all this. The armed forces form the backbone of the state, the 'body of armed men' that in the final analysis back up capitalist property relations. But, the argument runs, in periods of heightened class struggle, sections can be won over to the working class.

It doesn't sound like BAFF is going to be a particularly radical organisation. It's mostly run by officers, for a start. But according to the journalist who wrote the piece, websites where lower ranks discuss such things online might want to go even further. Interesting.