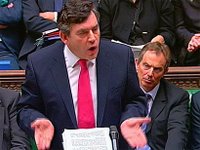 Press release from the Socialist Campaign Group on our prime minister in waiting's enthusiasm for nuclear weapons:

'Labour MPs from across the Party have reacted angrily to the Chancellor’s Mansion House speech last night, in which he announced he would go ahead with replacement of the Trident nuclear weapons.

'“Gordon’s announcement of spending up to £25bn on Trident replacement is sad and wrong. In 1970, Britain signed the Non-Proliferation Treaty which commits us to long-term disarmament. A Trident replacement would be illegal, and removes any arguments we might have for opposing the proliferation of nuclear weapons in other countries.

'“Nuclear weapons do not deter, are not independent, and not only kill indiscriminately when used – they leave a legacy of maimed and suffering population for decades to come, as the people of Hiroshima can testify”.

'“The whole tenor of the Chancellor's speech is a slap in the face for the Labour and Trade Union movement."

'"Gordon has laid down a clear marker for the approach he intends to take to the leadership of the party. It is a worrying sign that he is prepared to ignore the strong feelings of Labour Party members and trade unionists on this and other key issues of concern."

'“The Chancellor has constructed an image of prudence, yet he is prepared to waste £25bn on weapons that are unusable, illegal and ridiculously wasteful of public resources that could be better spent on improving our public services.”'

So ... you guys gonna challenge him for the succession, then?