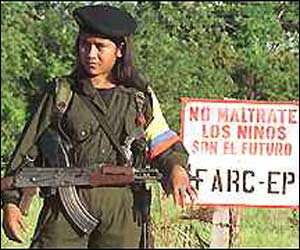 When groups on the British far left fall out, the polemics sometimes get pretty heated. But that's generally the worst it gets.

In Colombia, it looks like the bullets will shortly start to fly between the two main leftist insurgent armies. And the issue is not ideology, but rather what the struggle to control what are described as 'sources of income'. That's almost certainly a euphemism for the cocaine crop.

The local BBC correspondent adds: 'There is nothing likely to make the Colombian army happier than the prospect of the two principal Marxist rebel groups fighting each other.'

The whole affair should be an object lesson to those inclined mindlessly to cheer on anybody in the third world that can tote a Kalashnikov while simultaneously quoting Lenin. FARC and ELN have sadly long had more to do with drug trafficking than 'anti-imperialism'.