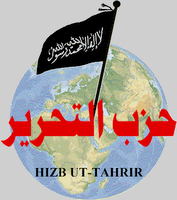 The comments box on the post below has somehow been taken over by a slanging match on the attitude the revolutionary left should adopt towards the Iraqi resistance. That's a valid debate, although it has been running for the last three years, and positions are fairly entrenched by now.

But here's something along the same lines that is a rather fresher topic. For the last two academic terms, I've been taking an undergraduate-level course on Islam, International Terrorism and International Security at Birkbeck.

I'm just back from the final session. The lecturer, Numan Hanif - who blogs intelligently on Islamic political issues here - expressed his opinion that Al Qa'eda will ultimately amount to little. The real challenge to the West, he argues, is Hizb ut Tahrir. On his estimation, there is a 70-80% chance of HT establishing state power somewhere in the Islamic world within the next 10-15 years.

For political Islam, the establishment of an expansion-minded caliphate led by HT would be what the Russian revolution was for the revolutionary socialist tradition. Such a state would definitely be in the business of 'exporting revolution'. Sections of HT elsewhere would rapidly rise to become mass parties, much as sections of the Third International did after 1917.

A question, then, for both Janine and Lenin, as well as anybody else with something to contribute. What should the revolutionary socialist attitude be to such a development?

HT's politics are both explicitly pro-capitalist and anti-democratic. Socialist currents would not be able to organise politically. Yet starting from the current political orientation of the SWP, it would not surprise me to see sections of the British far left hail the advent of the caliphate as a blow against imperialism.

Another question, too. Why has political Islam replaced ostensibly Marxist currents as the radical opposition to corrupt ruling regimes in so many Islamic countries? That says a lot about our failings, I believe.

PS: For those that need it, there are primers on HT here and here.