Industrial action in the UK 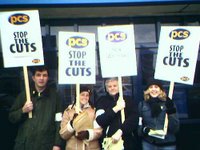 In so far as they represent a proxy measure of class struggle, that latest figures for industrial action in the UK make interesting reading for socialists:

‘The total number of working days lost in the first three months of the year was almost four times the total for the whole of 2005. In the first quarter, 616,000 equivalent work days were lost, compared with 158,000 days for the whole of last year, the lowest on record.’

OK, hardly a return to the glory days of Red Robbo addressing mass meetings in the car park. But given that working-class disaffection with New Labour is clearly on the rise, it could just represent another small pointer to a change in the prevailing mood music. Consider these statistics, too:

‘Only 5% of all working days lost to strikes in the first quarter of this year were in the private sector, with 95% being lost in the public sector, according to official figures … The public sector accounts for about 20% of employment.’

The message here is that there is still a massive job of work for the labour movement to do when it comes to rebuilding itself. On the other hand, today’s front page lead in the Guardian reports on Gordon Brown’s call for a public sector wage freeze. That isn’t going to be popular, and is likely to harden attitudes, both in the workplace and at the ballot box.

UPDATE: Here's the Labour left/trade union take on the pay freeze, contained in a press release from Public Services Not Private Profit campaign:

'“The Government’s programme of job cuts and privatisation is undermining its own investment in our public services and is having a devastating effect on the morale of public sector workers. Rather than listening to big business, the Prime Minister should listen to the workers who are delivering services if he wants advice on how to run public services.

'“Brown’s call for a pay freeze for workers in our public services is yet another blow to staff morale which is already at breaking point."'