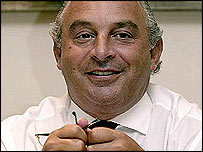 Bhs and Arcadia boss Philip Green - pictured left - is the latest top businessman to pick up an honour from New Labour, after being awarded a knighthood last week.

Let's pause and reflect on this one. This is the man that last October decided to award Arcadia shareholders a £1.3bn dividend.

And you know what? Green and his wife own 92% of the group, and therefore received £1.17bn, the largest payout to an couple in British corporate history.

Oh well, I hear you say, at least he paid tax on it. Nope. Living in Monaco he doesn't have to, and thereby saved himself £300m.

Let's also consider how he made this pile. Read what anti-sweatshop campaigners Labour Behind the Label and Women Working Worldwide have to say about the business practices of Arcadia's suppliers, which are said to include poverty pay, excessive hours and the repression of trade unions. And remember, this is a guy that New Labour want you to call 'Sir' from now on.

And finally let's look at what he does with the dosh. Green owns a £20m yacht and a £16m private jet. He shelled out £4m for his son's Bar Mitzvah, flying 200 people to the French Riviera for the occasion, which included a gig by Destiny's Child. For one of his birthdays, his wife bought him a solid gold Monopoly set, featuring his very own acquisitions.

Independent business editor Jeremy Warner is nobody's idea of a leftwinger . Nevertheless, he makes some good points about this whole sorry episode:

'The massive dividends [Green] draws from these businesses are paid offshore, which means both that they avoid tax, and because they are financed from borrowings, that the Exchequer receives less corporation tax ...

'Mr Green's assets are owned by his family in Monaco, with the effect that the Green family doesn't have to pay any tax on the massive dividends it takes out of Mr Green's private equity acquisitions ...

'When it was elected, Labour promised to do something about the growing number of the world's super rich who earn their living in Britain but pay little or no tax here. Curiously, this commitment has been almost wholly forgotten during the Government's slide into moral decay.

'To the contrary, entitlement to a knighthood now seems to rest with those who make the most, boast the most and manage to avoid paying tax on it to boot. If Mr Green had paid UK tax on the £1.2bn he paid himself last year it would have funded countless inner city academies without the Government needing to go looking for handouts from the super rich.'

PS: Memo to Ken Livingstone: yes, he's Jewish. Just so you know, like.