One day is fine, the next is Black 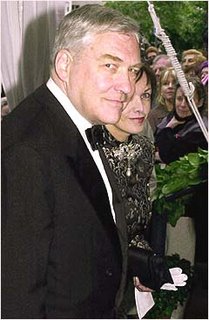 The possibility of an spell behind bars has moved another step closer for Conrad Black, the Tory peer and former owner of the Daily Telegraph, Sunday Telegraph and many other leading newspapers around the world.

Thatcher's Canadian buddy - pictured left - faces trial in the US next year on fraud charges, with claims that he ripped off Hollinger International to the tune of $400m during his stint as chairman and chief executive.

But now federal prosecutors have asked a judge in Chicago to revoke his bail. A court filing argues that Black lied about his assets and made misrepresentations about a lien on his mansion in Palm Beach, Florida. Prosecutors also say he failed to make a mortgage payment on the property, in violation of a court agreement.

In addition, they doubt his claim only to have liquid assets worth $300,000, given that he recently wrote a cheque for $460,279 to pay Florida property taxes, and reportedly made a donation of $500,000 to a Canadian opera company.

Talking of prison sentences, erstwhile City Slicker James Hipwell has now served his three-month sentence for his part in the Daily Mirror share tipping scandal. After paying his debt to society, he has this observation about the role of his editor at the time, a certain Piers Morgan:

‘The fact is, he emptied his bank account into Viglen, sold everything in his Personal Equity Plan, everything in his wife’s PEP, and ended up with nearly 70 grand in stocks and shares. And we’re meant to believe he didn’t know we were writing about Viglen? Bollocks.’