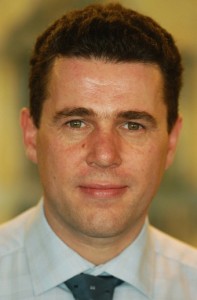 Several previous posts on this blog have lamented the way in which the case for social ownership is simply no longer being made in sectors as varied as the railways, water and the car industry.

Obviously, the New Labour leadership actually believes in the inherent superior of the private sector in all areas of economic activity. Many Labour backbenchers, party members and trade union are sympathetic to a democratic socialist perspective, but probably figure that dangerous leftwing ideas are a sure-fire vote-loser.

But the evidence is the electorate is at least of the opinion that enough public assets have been sold off already, if this press release from the anti-privatisation campaign Public Services Not Private Profit is anything to go by:

‘An opinion poll commissioned by the joint-union Public Services Not Private Profit campaign has revealed overwhelming public opposition to the government’s privatisation agenda.

‘When asked how much of a role private companies should have in running public services, 74% of respondents opposed any further role. Only 17% supported more privatisation of public services.

‘John McDonnell MP, Chair of the campaign said: "Gordon Brown can no longer ignore the overwhelming evidence in this and other polls of the public's total opposition to his policy of privatising public services"

‘"His privatisation agenda has now provoked what will be the broadest alliance of trade unions as part of the largest lobby of parliament in decades on this issue."

‘"People simply do not believe 'private sector good, public sector bad'. Thousands of trade unionists and Labour Party members from all over the country will be coming together at Central Hall, Westminster on 27th June to demand that parliament calls a halt to this privatisation madness."’

‘Mark Serwotka, General Secretary of PCS - pictured above left - said: "This poll shows that wool hasn't been pulled over the public's eyes when it comes to privatisation and that people have had enough of the privatisation of key public services."

‘"With thousands of people converging on Westminster on Tuesday to voice their support for public services not private profit it is time the government halted its dogmatic approach to selling off public services."’

For PR reasons, the campaign correctly decided not to lead on the angle of how much positive support exists out there for social ownership. But in the footnotes to the press release, we read:

Let me run that one past you again. Getting on for half the adult population would like to see at least some privatised services back in the public sector, and almost one in five would favour seeing all of them out of private hands.

No figures for how Labour voters answered question two were made available. But it is almost certain that the figures would be overwhelmingly positive. Democratic socialism. It only looks dead.

PS: I won’t be able to make the lobby myself. But I hope it goes well. Why not get there if you can?