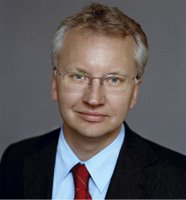 I had been under the impression that Trotskyism was doing moderately well in Sweden. I mean, I accept that the country is probably not going to be the epicentre of the world revolution.

But Rättvisepartiet Socialisterna - Swedish section of the Committee for a Workers' International, the international tendency centred on Peter Taaffe's Socialist Party in the UK - has won a handful of council seats in working class areas.

So I was well gutted to read an interview given by the country's finance minister Pär Nuder (pictured left) to the Financial Times - shortly before joining Gordon Brown to watch the England-Sweden game, incidentally - in which he appears to diss the local far left as a bunch of wusses:

'We have more "pro-change" trade unions than continental Europe because the trade unions know we have robust and stable social security systems. We don't have trade unions where there are very loud, strong minorities, organised Trotskyites, that can say No to any change that is proposed by the management.'

Get your act together, comrades ...