The truth about Haditha 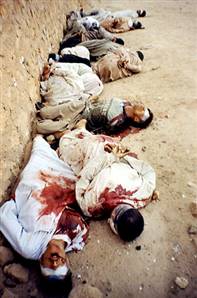 Want to know the truth about what the US Marines do in Haditha? If so, forget all those horrible stories you might have read about them murdering 24 Iraqi civilians – including many children - in that town last year.

Instead, check out this article posted last weekend at Operation Iraqi Freedom, the official website of the Multi-National Force-Iraq. And no, it isn’t a parody.

‘The 38-year-old leads a handful of Marines who spend their days rebuilding schools, hospitals and giving monetary reimbursements to Iraqis whose property has been damaged during three years of combat operations.

‘"We have made a lot of progress, but there is still a lot more to be made," said Mace, a Pottstown, Pa., native who leads one of 17 civil affairs teams operating throughout Al Anbar province. "We are going to make as big an impact on the community as we can."'

Impact on the community? You can say that again.

‘Notable progress in the region’s stability has made such civil affairs projects within the region possible, said Mace.

‘"As security and stability in the (area) increase, the willingness of the local populace to cooperate with us will progress as well," said Mace.’

‘Recently, Mace and his Marines visited several schools in the region and repaired doors and windows which were damaged by insurgents, said Mace.

‘A principal at one of the local elementary schools said the students were in dire need of basic school supplies such as paper, markers and pencils.

It is thanks to activities such as this that local people are learning to trust the Marines:

‘"Many of the local people are starting to realize the Marines are good people and are concerned with their wellbeing," said an Iraqi interpreter assigned to work with the Marines. "The Marines have begun to build good rapport with the residents and this opens the door for us to communicate with them."

‘Though Coalition forces make every effort to minimize collateral damage in local towns and villages during military operations, some damage can occur, such as broken doors and damaged vehicles, said Sgt. Paul Flores, a 24-year-old from Los Angeles.’

And here’s the clincher, courtesy of Staff Sgt Omar Palaciosreal:

‘"You earn a lot of credibility when you show residents you care about their well-being and their children," said Palaciosreal.’