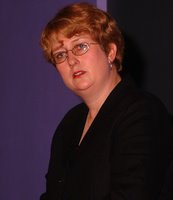 It seems like the Blairites are gearing up for a scrap with the Labour left:

‘Labour MPs have agreed to give the government whip the power to suspend colleagues who defy the party line.

‘The 'yellow card' gives Jacqui Smith - pictured left - an option between a verbal reprimand and total withdrawal of the whip.

‘If suspended an MP would lose their privileges and access to meetings of the Parliamentary Labour Party.

‘But they would still be expected to vote with the government.’

Presumably, a suspended MP would be ineligible to stand in leadership and deputy leadership contests. Message to comrades McDonnell and Simpson. Watch your backs.