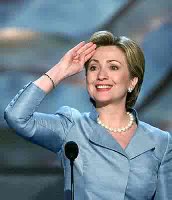 Just in case you needed it, a story in today’s FT offers a timely reminder of where the real power lies in US politics:

‘Hillary Clinton (pictured left, reporting for duty) has been cosying up to Wall Street in recent weeks with a series of meetings with top executives that could help her follow the path blazed by her husband ahead of his first presidential run.

‘Some events, such as a recent gathering at Morgan Stanley that included chief executive John Mack, a big Republican donor, have been fundraisers for the Senate campaign.

‘Others, including a chat with executives at Lehman Brothers, are more policy-oriented. ‘Mrs Clinton is said to be planning meetings at Merrill Lynch and Credit Suisse, among others …

‘Political observers noted that Mrs Clinton faces little significant opposition in 2006. They said the Wall Street meetings could pay dividends in 2008 by helping reassure bankers that Mrs Clinton is a free market centrist, not the tax-and-spend, protectionist liberal some Republicans paint her to be.’

As reported earlier on this blog, Ms C already appears to enjoy endorsement from Rupert Murdoch.

US presidential elections usually generate a certain amount of somewhat abstract debate on the left. Majority opinion probably favours lesser evilism. Better vote Democrat or the nasty Republican gets in.

By contrast, Marxists have traditionally argued either for an abstention or a vote for a token far left candidate. But the last two times around, Ralph Nader has picked up a certain degree of support, even from organisations that in theory should brand him a bourgeois candidate. That stance seems to me entirely justified, given the sterility of the alternatives.

One thing’s for certain. The way the Clinton candidacy is shaping up, a Democrat vote is going to be hard to justify in 2008.

By the way, can any US readers tell me whatever happened to the Labor Party founded in 1996 around Tony Mazzochi of the Oil, Chemical, and Atomic Workers union? Is it still a going concern? Any chance of seeing it run any candidates any time soon?