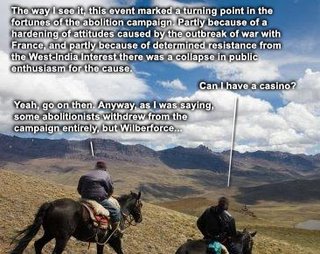 The DPM is in trouble again, this time for his links with American businessman Phil Anschutz who owns the Millenium Dome, and wants to develop it into Britain's first super-casino.

Let's see. This wouldn't be Phil Anschutz, the rightwing evangelical Christian that gave $1m to Republican presidential candidate Bob Dole's political library, and a further $100,000 to a Dole-linked rightwing think tank? You know, the same Phil Anschutz who backs a wide range of reactionary causes, including opposition to gay rights? The very same, I'm afraid.

Here's how the BBC reports the story, which is in all the broadsheets today anyway:

'The deputy prime minister and a small number of his civil servants stayed at Mr Anschutz's ranch in July last year as part of a nine-day trip to America.'

Two Shags had this to say:

'"My contact with Philip Anschutz relates solely to the use of the Dome post-sale in terms of the regeneration of the area and Mr Anschutz's interest in William Wilberforce, a former Hull MP and slavery abolitionist about whom Mr Anschutz is making a film as I am personally involved in the 2007 abolition bicentenary."

'Mr Prescott says he met Mr Anschutz seven times between 15 August 2002 and 22 July 2005. Officials were present on each occasion.'

But there are alternative takes on Anschutz's track record, which the British media doesn't seem to feel is worth mentioning:

'Named Fortune's "greediest executive" in 1999, the Denver resident is a generous supporter of anti-gay-rights legislation, intelligent design, the Bush administration and efforts to sanitize television. With a net worth of $5 billion, he is Forbes ' thirty-fourth richest American ...

'Anschutz heads a vast media empire whose assets include the Examiner chain [the remnants of the Hearst publishing empire - DO], twenty percent of the country's [the US - DO] movie screens, and a sizeable stake in Qwest Communications, the scandal-ridden telecom giant he formerly directed. (Anschutz was accused of helping falsely inflate Qwest profit reports, then making millions by selling his own shares in the company -- a claim he ultimately settled by paying millions to charity.)

'A heavy contributor to the Republican Party for decades, Anschutz helped fund Amendment 2, a ballot initiative to overturn a state law protecting gay rights, and helped stop another initiative promoting medical marijuana. More recently, he helped fund the Discovery Institute, a conservative Christian think tank that mounted a public relations campaign and financed "research" into intelligent design. He has also supported the Media Research Council, the group that generated nearly all the indecency complaints with the FCC [Federal Communications Commission, the US media regulator - DO] in 2003.'

Once again, we see a senior Labour figure kow-towing to an extremely wealthy - and extremely rightwing - businessman. Once upon a time, I would have been shocked.

PS: Graphic nicked from Guido, who probably nicked it from Tim Ireland, to whom credit is due.