What I said about Galloway in 2003 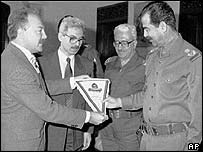 After the Daily Telegraph wrote what ultimately proved to be a libelous article accusing George Galloway of being in the pay of Saddam in April 2003, I wrote an article on the affair for the Weekly Worker. It has been causing controversy ever since.

Recently the Respect activist Ian Donovan - a former Spart and CPGBer - has raised the matter several times on the letters page of that publication, the most widely-read on the British far left. He has also popped up in the comments box of this blog, describing the piece as 'a wretched screed'.

M'kay Ian. In retrospect, perhaps I was a little harsh on the bloke. Perhaps. But not by much. I fully stand by the main political thrust of what I said three years ago, especially the wider points about the need to avoid backhanders from nasty authoritarian regimes trying to present themselves as somehow left wing.

But let this blog's readership be the judge. Here's the article in its entirety. You have the right of reply, Mr D.

Are you now or have you ever been in receipt of Moscow/Tripoli/Baghdad gold? Delete foreign capital as appropriate. In the latest version of a script all too frequently rewritten over the years, the Daily Telegraph is accusing George Galloway of feeding his serious Armani habit with £375,000 a year in Iraqi kickbacks, in return for public relations services to the regime. The Labour MP has hit back with libel action against the paper.

The trouble is, this man’s past record of Saddam-schmoozing makes it impossible even for his strongest supporters simply to dismiss the charges as preposterous or inconceivable. He is now paying the political price of openly saluting the tyrant’s “courage, power and indefatigability”. Accordingly, the glee of Galloway’s political opponents is uncontained. Finally got that bastard bang to rights, they enthuse.

Let us not rush to judgement. Natural justice - at this stage anyway - must allow him the benefit of the doubt. While the documentary evidence appears pretty damning, and the Daily Telegraph is way too smart for crude falsification, the case remains unproven.

In the eight decades since the Zinoviev letter, many socialists have been turned over by Fleet Street for being in the pay of various nasty Johnny Foreigners. Remember the Daily Mirror’s ‘Col. Gadaffi paid Scargill’s mortgage’ campaign? Remember the Sunday Times’ ridiculous attempt to smear Michael Foot as the KGB’s very own ‘Agent Boot’?

Britain’s best-selling broadsheet is not nicknamed the Daily Torygraph for nothing. Just reading the editorial the Telegraph published on the day it splashed material supposedly gleaned from the burnt-out bunkers of the Iraqi intelligence service underlines the political agenda at work.

Both the Labour Party and the Stop the War Coalition are explicitly branded guilty by association, while the entire anti-war movement is effectively dismissed as the provisional wing of the Ba’athist party. Hundreds of thousands of well-meaning peaceniks were personally duped by Gorgeous George, the leader writer maintained, and must now surely realise the error of their ways.

That is a simple non-sequitur, of course. Political arguments stack up - or not - on their own account. The revolutionary socialist case against what is happening in Iraq does not stand or fall by the belief systems of those that led the campaign against it. It is true that the Stop the War Coalition was led by an Uncle Joe nostalgia merchant in league with British exponents of islamic semi-fascism and Mick Jagger’s ex-wife, all united in a common endeavour to put the leader of the Liberal Democrats on a podium in Hyde Park.

It is even true that the British National Party was against the war. In Telegraphland, that logically makes the anti-war movement incipient fascists. Conversely, liberal and soft left commentators who supported the conflict must crudely be written off as de facto ultra rightists, because the intellectual inspiration for the atrocity has come from a clique of Washington neo-conservatives.

Unless it can be shown that Galloway divvied up the illicit cash between a million or so marchers - and that would have given them about the price of a packet of crisps apiece - then nobody who protested on February 15 is in any way complicit in whatever he may or may not have done.

When it comes to political funding, remember also that the Conservative Party under Margaret Thatcher - a close friend of Telegraph owner Conrad Black - was not adverse to accepting gifts from Greek fascists, businessmen on the run from the serious fraud office or Hong Kong billionaires in hock to less-than-democratic Beijing.

But such is the gravity of the accusations against Galloway that no publication still in possession of its marbles would go to press with such a sensational story unless it was pretty convinced it had got the basic facts straight. Let the truth be established. If he did take the money, the left should lead the condemnation.

For a start, it is primarily our comrades - and not the Iraqi capitalist class or the wealthy exiles - that so often lost their lives at the hands of Saddam. Disgracefully, parts of the British left have sometimes sped their path to the firing squad.

In the late seventies, Workers Revolutionary Party photographers took pictures of demonstrators outside the Iraqi embassy in London and then passed the photographs on to its paymasters sitting inside the building. The consequences could have been tantamount to a death sentence.

This must rank as one of the worst atrocities ever committed by an ostensibly socialist organisation in Britain. That incident won’t have done a whole lot of good for the prospects of any future Iraqi section.

When it comes to taking money from dictatorships, whole sections of the British left are hopelessly mired in a moral grey zone. The Communist Party of Great Britain - and the publishers of this newspaper present themselves as the current incarnation of that outfit, at least when it suits them - was extensively subsidised by suitcases full of cash from Moscow. It was hardly the only CP worldwide in that situation, either. Right or wrong? Wrong, because of the nature of what Stalinism represented.

There would be no problem with a healthy revolutionary international making those kinds of payments. Ultimately it was not the money that corrupted the ‘official’ CPGB; it was the politics. Of course, that assessment comes easier with hindsight.

Although Scargill did not personally benefit, the fact is that Libya did provide financial support to the National Union of Mineworkers during the great strike of 1984-85. Right or wrong? Given the human rights record of the Libyan state, it might have been preferable not to take the cash. In the concrete circumstances, the money was badly needed and the cause was just. At least half right, then.

Sundry tankie splinter groups reputedly relied on lucrative printing contracts from the odd people’s democracy or two, while Hoxha’s Albania was always good for a Marxist-Leninist hand-out in order to keep a few small fan clubs around the world afloat.

None of these outfits could quite be described as bought and paid for. They would have been quite happy to trumpet the latest triumphs of Czechoslovak collective farm tractor stations, even without the dosh. Yet the used fivers helped them sustain an artificial existence they did not properly deserve on the basis of their domestic support.

So where should the line be drawn? For a start, using any proceeds for personal rather than political purposes amounts to pure and simple bribery. That goes to the heart of the accusations against Galloway. If there were any ill-gotten gains, they do not appear to have been used for political purposes.

Then there are the political considerations. What if there is a political price tag attached, even if only a minor one? That is where the difficulties really kick in.

Probably the donor would not even need to specify that he did not expect to read any criticism of his government in the recipient’s press. Gooses, golden eggs, and all that stuff. Victory to the Arab revolution! Read Gadaffi’s Green book!

Deals like that are far too costly. The principle at stake at all times is independent working class politics. By that yardstick, taking money from repressive regimes is nearly always wrong. And putting a progressive political gloss on them is absolutely always wrong. Baksheesh Bolshevism has a nasty tendency to backfire.