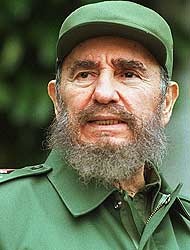 If there has been a military coup in Cuba - as Christopher Hitchens and others maintain - then military coups are not as much fun as they appear to be in newsreel footage.

As I mentioned in my last post, I did see a number of troops in the main tourist area last weekend. Since then ... nothing. No tanks in the streets. No distant sounds of artillery fire. I feel cheated.

So instead, let me share with you a couple of examples of the clear devotion the Cuban people for el comandante, as published in Granma - the only available newspaper - this week. On Thursday, Atilio A Boron gave us his perspective on the Cuban revolution, adding:

'Fidel is the personification of this extraordinary achievement. He is Spartacus triumphant, who defeated the American Rome, the unyielding Quixote who synthesises the clairvoyance of Marti, the heroism of Che and the iron will of Ignacio de Loyola.'

Some guy, then. Yesterday, a bunch of Cuban orphans saw their letter to FC published on page one, under the headline 'We have confidence in your unwavering spirit'. This is how they see the man:

'We lost our fathers when we were very small ... but we have always felt by our side a greater Father, the father of all Cuban revolutionaries. From you we have always received attention, affection and the example of an irreproachable revolutionary.'