Francis Maude on the Labour-Union link 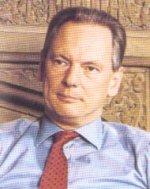 Cameron’s Conservatives are busily shredding one policy after another, in their increasingly frantic efforts to convince us they are no longer the Nasty Party.

But probably the one hang-up they are genetically incapable of ever overcoming is their gut hatred for the organised working class, and the idea that working people should have any kind of distinctive political voice whatsoever. Here’s the latest example:

Tory Chairman Francis Maude - pictured left - said: ‘Labour is now almost entirely dependent on the unions for funding. In return, they're getting pet policies and bungs with taxpayers' money.’

Don’t be silly, Mr Maude. What trade unions are ‘getting’ from New Labour is the maintenance of what Tony Blair himself happily admits are ‘the most restrictive on trade unions in the western world’. Pretty much unchanged from those introduced your lot in the eighties and nineties, in fact.