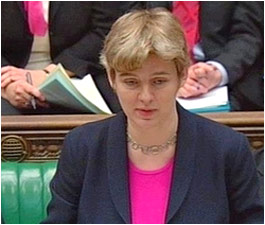 New Labour has unveiled the identity of its chosen supremo in the struggle against religious extremism. Ladies and gentlemen, will you big it up for ... Ruth Kelly.

Such an appointment defies satire. Ms K, after all, is a member of the far right Catholic sect Opus Dei, founded by a sympathiser of Franco's fascist administration in Spain.

Many of its adherents practice self-flagellation, although our Ruthie refuses to specify whether or not she goes in for that sort of stuff.

Some might say that such affiliations make her less than ideal for the task. Other OD members have recently faced accusations of Islamophobia, for instance.

And according to one book on the group:

'Opus Dei’s command council runs an immense intelligence network and a vast multinational conglomerate, preparing for what the organisation regard as Christendom’s inevitable showdown with radical Islam.'