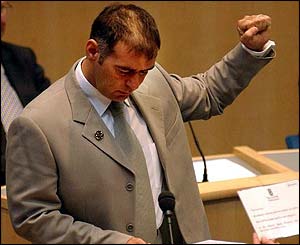 Purely for information purposes, here is the founding statement of the new party Tommy Sheridan - in alliance with the Socialist Workers' Party and the Socialist Party - is due to launch this weekend. An organisational motion follows.

What about the politics of the thing? Aside from a few swipes at former comrades in the Scottish Socialist Party, it's the sort of lowest common denominator 'we wish there could be sunshine every day and that everybody loved their mums' sort of list that most lefties would fully support.

Any distinctive political character is not apparent from these words. But given the track record of some of the project's backers, there is probably good reason to fear the worst.

I'd be grateful for any information from Scottish readers on who can be considered the 'leading intellectuals' in the new outfit.

Solidarity - A new movement for socialism in Scotland

This meeting believes we share a historic responsibility to provide people in Scotland with a socialist alternative to the pro-market agendas of New Labour, Tories, Liberal Democrats and the SNP. Many working class voters are so disillusioned with politicians that theydo not vote at all.

The war in Iraq and Afghanistan continues its deadly course and Lebanon lies in ruins; this is the latest stage in a regional conflict at the root of which lies the same free-market agenda that has devastated working class communities the length and breadth ofScotland. Immigrant communities are under attack, Islamaphobia is onthe rise and our civil liberties continue to be undermined.

The scale of anger and disillusionment with New Labour is growing and the need for that socialist alternative is more urgent thanever. Sadly, the SSP is no longer able to play that role.

We agree it is now only possible to take the socialist movement forward by immediately launching a new political party that will become, in time, the broad party of socialism in Scotland - bigger, better and bolder than that which has gone before, a fresh movementwith an attractive, pioneering, and inclusive spirit, welcoming to all who join, irrespective of ethnicity, gender, age, sexual orientation or disability.

We will demonstrate SOLIDARITY WITH those fighting against low pay and oppression. SOLIDARITY AGAINST poverty and discrimination in all its forms. SOLIDARITY FOR an independent socialist nuclear free Scotland.

Our new party will be

A campaigning movement - against social injustice and poverty, for a decent living wage and pensions for all, against hospital closures and local service cuts, for empowered communities and trade union rights, in opposition to racist discrimination and bigotry and all forms of oppression, for our civil liberties, and for public ownership and democratic control of our major industries, land and assets.

A democratic movement - for an independent socialist Scotland, a modern pluralist republic that harnesses our collective energies, talents and wealth for the benefit of all our citizens while safeguarding and respecting individual freedom in all its aspects.

A workers movement - that will support trade unionists and all workers in struggle, fighting for the rights of workers in Scotlandand internationally whether or not they are already organised in a trade union, for the repeal of all anti-trade union laws.

An anti-war movement - opposing all imperialist wars wherever they occur and the current occupations of Iraq, Afghanistan, and Palestine. A grass roots movement - that will be active in campaigning around the issues that matter in all parts of Scotland, from the borders tothe Northern Isles, from the Hebrides to the oil rigs of the NorthSea, in our streets, in our communities and our workplaces, reaching out to people, and engaging in constructive political debate.

An environmentalist movement - campaigning against new nuclear power stations and for the removal of Trident nuclear missiles from the banks of the Clyde, campaigning positively for massive investment inrenewable technologies, and a truly integrated and modern publicly owned transport system, for environmental justice for all.

A young people's movement - that aspires to be the natural political home for young people, supporting campaigns for a decent minimum wage, free education and affordable housing.

An internationalist movement - committing ourselves to solidaritywith working and oppressed peoples in struggle across the globe, engaging with and supporting international resistance to capitalism, neo-liberalism and globalisation.

A socialist movement - that fights for the redistribution of wealth from big business and the millionaires to working class people andtheir families.

We call on everyone who shares our vision to join us.

Then a separate motion on organisation:

We agree that our new party will contest all eight list seats in the forthcoming Scottish Parliamentary elections, and will contest targeted council seats across Scotland.

We call on members, regions and branches of the SSP to disaffiliate from that broken organisation immediately and affiliate wholesale to the new party.

We resolve to launch a national campaign of rallies and public meetings across the country to sign up new members.

Name, constitution and program of the new party

The party will proceed for the time being under the working name of Solidarity – Scotland's Movement for Socialism.

We will hold a founding party conference in November to discuss our constitution and campaigning priorities. We further agree that the name of the new party will be decided by a One Member One Vote ballot of the membership in time for that conference.

This meeting resolves to set up a Steering Committee to plan launch rallies, deal with the media and to prepare a draft constitution and agenda for the founding conference. The Steering Committee shall also have responsibility for consulting with the membership and producing a shortlist of names and party symbols for consideration, and accepting as bona fide party bodies new branches, regional councils etc.

The interim Steering Committee shall consist of MSP's Rosemary Byrne and Tommy Sheridan, two individuals elected from each region (with an understanding that there will be regional flexibility on the way members are elected) plus two from each platform.

We further call upon the members to meet as soon as possible to organise regional meetings, branches where appropriate and other interim committees until we agree a constitution and democratic structures for the new party at the conference in November.