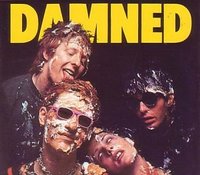 One Saturday night in late 1976, a long-haired, flare wearing teenage Led Zep fan went to watch the Damned play a gig in Northampton. They were the first punk outfit ever to hit the town. That's the sleeve of their debut album pictured on the left.

Neat neat neat. After 20 minutes – yeah, the entire set only lasted as long as the average Jimmy Page guitar solo – of the loudest and most brutal adrenaline rush rock and roll I had ever heard in my young life, I came out resolved to get a hair cut and buy drainpipes as soon as the shops opened on Monday morning.

Fast forward three decades. About a year ago, a certain fishnet and DM-clad bottle blonde ex-punkette and I witnessed the shambolic outfit that trades under the same name these days, playing at The Town and Country.

Dreadful. The punk pioneers had degenerated into what is basically a comedy nostalgia turn.

Now I read on Socialist Unity Blog – where else? - that the band’s original bassist, Captain Sensible, has launched the Blah! Party. You can read the organisation’s policies here.

Hmmmm. Hardly the transitional programme, is it? The politics are as poor as his music is nowadays. Surely what is needed is a new political formation that combines revolutionary socialism with punk rock energy?

This would have a better name, for a start. How about the Combat Rockers? Or the Never Mind the Bollocks Coalition?

Our platform: Anarchy for the UK. Alternative Ulster. Your Generation (don’t mean a thing to me). We have the right to work. Sing if you’re glad to be gay.

Free copy of NME and gram of amphetamine sulphate - dissolved in a bottle of Strongbow - per group of four bored provincial teenagers every Saturday night, so that they don't have to club together their dole money to buy it.

Most members would have a direct personal interest in fighting New Labour's plans to raise the pension age.

And no airplay whatsoever for Blunt, Melua and Winehouse. Got it?