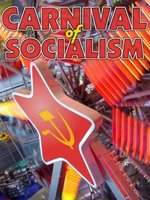 Carnival of Socialism exists to spotlight socialist blogging, and Dave's Part is hosting edition number eight. For the next four weeks, I'll be posting links to the most interesting radical stuff I find out there on the internet. I'd also be happy to hear your suggestions on what to include. But let's start with some of my own picks.

I was thinking of writing something on the death of Sir Alfred Sherman myself. But Charlie over at Random Pottins beat me to it, and did such a thorough job of research that I realised at once that nothing I could write could possibly top his offering. Read it here. This is the sort of intelligent socialist journalism I really would like to see more of in the blogosphere.

Janine is blogging live from the Trades Union Congress conference in Brighton this week - the British equivalent of the AFL-CIO, for the benefit of foreign readers - and promises updates several times a day. Given the minimal coverage the event gets in the mainstream media these days, she could be an important source of information.

Speaking of conferences, Liam MacUaid - old East London Trot comrade of mine - offers this perspective on Labour's decision to invite the Rev Ian Paisley to address its forthcoming gathering:

'Calling the Pope the Antichrist is only a simple statement of fact but every loyalist killer who ever shot or hacked a Fenian to death was, in part, driven by what Paisley said and did.'

Oh, and still on the conference theme, he adds this on the internal situation in Respect, which he should have known better than to join in the first place:

'Delegates to Respect conference are elected by the branches on a ratio of one delegate for every ten members. Last year Tower Hamlets Respect was entitled to send forty delegates. This year it is seventeen. I will have conference weekend free, having failed to get elected. Fortunately political pluralism and a diversity of socialist opinions will be guaranteed by the nine SWP members who were elected.'

Looks like membership is falling fast, even in the number one bastion of 'the Unity Coalition'.

Now for a couple of nominations from John Angliss. First, there's twp - an American living in Britain who blogs at Unknown Conscience - makes some sharp comparisons between racism in the US and racism in the UK:

'The next time the government want to look at why even English-speaking Americans like myself feel unaccepted in this country, perhaps they should take a look at their imperial past and recognise that the time for merely "allowing the savages" to act and live with the cultures they grew up in - instead of respecting them a human beings and equal - died with the British empire. Welcome to the 21st century.'

Second, there's Chris Dillow at Stumbling and Mumbling. I don't know whether or not Chris would describe himself as a socialist or a liberal, but I've always enjoyed his blog. Us fortysomething ex-grammar school boys from the Midlands turned London trade press hacks have got to stick together, y'know. He's rather a bright chap, too, as his observations on Marxist economics make clear:

'Why is it that so many people think Marx was an idiot for subscribing to the labour theory of value, whilst Smith was a genius even though he subscribed to an even naiver version of that theory?

'But then I know the answer, don't I? Smith's in the right tribe, and Marx is in the wrong one. The fact that both men had great insights, and flaws, is irrelevant. Because what they actually wrote isn't the point, is it?'

Dunno why exactly, but there are a number of interesting socialist blogs emerging from the US right now, which can't simply be pidgeon-holed into the dominant categories on the European left. Renegade Eye has long been essentially reading, and I also like New Appeal to Reason. Joining them since last May is the Red Mantis, an eclectic mix of everything from Christianity to Che Guevara, who professes himself optimistic for the future of the American left:

'My guess is that in the next few years as class distinction continues to grow, democratic socialism may gain some momentum with Americans who are tired of living in poverty and without adequate food/health care. The answer to these woes is never revolution, but rather a democratic reform, something for which we are long overdue.'

Good to see that not all American Christians are rock-ribbed Republicans. Another Carnival installment next weekend.

PS:Check out also the Red Baron, who offers his take on the war the media handles terrorism issues here.