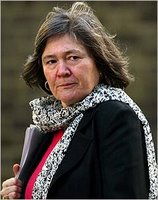 Clare Short and the Labour Party seem likely to part company, well, er … shortly, so to speak. So there will be no harm done if I break a confidence I have been sitting on for a couple of years.

I did know Clare a little while I worked for Tribune. Indeed, one of the main television news broadcasts accompanied the story of her ‘ashamed of Labour’ outburst with decade-old footage of her and yours truly chatting while entering Conway Hall.

But I have known her younger sister Eileen rather longer, ever since she was in the Militant Tendency back in the eighties.

The last time I ran in to Eileen was at Paul Foot’s funeral back in 2004, where I learned that had gotten involved in Respect and thereafter had joined the SWP.

And one of the off-the-cuff remarks she made to me was: ‘Things are so bad, nobody in my family even votes Labour anymore.’

Little wonder that Clare is stepping down as a Labour MP, I suppose. Meanwhile, the Birmingham Post speculates that she could soon be signing up with the Lib Dems.

C’mon Clare. You can do better than that.