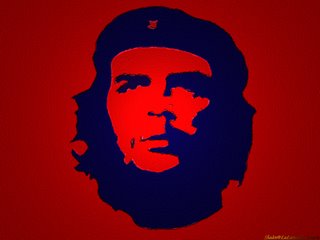 Just to appeal to my anti-Castro fan base in the United States and elsewhere, here's another article based on my recent visit to Cuba. It will appear in the October edition of Red Pepper magazine.

Meanwhile, I am reading some of the heavyweight economic and political material - in both English and Spanish - that I picked up in the country, with the intention of writing a long and serious theoretical piece when I have the time to do so.

If you stay in one of the five star hotels, Cuban is a fabulous place for a holiday. Sit down by that swimming pool and bask in the Caribbean sunshine as you light up a cigar from beyond the wilder shores of Freudian symbolism and knock back cocktails blended from the finest rum in the world. And if it’s nightlife you want, there’s hot jazz and salsa clubs that stay open until four AM.

But for most ordinary Cubans, life is pretty damn tough. I saw that for myself this summer, when I spent four weeks in an ordinary home in Havana. Even such basic foodstuffs as rice are rationed. Water supplies are sporadic, and power cuts regular occurrences. The housing stock is badly run down. Many everyday items are simply unobtainable.

Yes, of course the US blockade and the economic effects of the collapse of the USSR are part - although by no means all - of the explanation. But there is no getting away from the conclusion that Cuban society is deeply polarised as a consequence.

Beyond a layer of older people who lived through the revolution in the late fifties, there are few strong supporters of the government. The younger a person is - and the darker the colour of their skin - the more likely they are to be hostile. Many of those at the sharp end of the multiple hardships would rather be living in Miami, and don’t think twice about saying that to a foreign journalist.

The thing is, Cuba is the last country with even a semi-credible claim to be somehow ‘socialist’. Few nowadays regard China as anything other than an extended neoliberal sweatshop with the chutzpah still to fly the red flag, or see North Korea as more than a famine-ridden hellhole suffering under a particularly ghastly hereditary quasi-monarchy.

Accordingly, many lefties in the developed world maintain a soft spot for the homeland of Fidel Castro. After all, the Cuban system wasn’t imposed by the Red Army, was it? It emerged from a genuine revolutionary process that grew over from nationalism to socialism.

True, Cuba is a one party state. There are no independent trade unions, and the government maintains the strictest imaginable censorship over the media. In plain English, it is a dictatorship. But it is dictatorship lite.

There are political prisoners, but no gulags. Party cadre are privileged, but to an extent limited in comparison to other historical examples. And Che did try to export revolution rather than build socialism in one country. Welcome Sunshine Stalinism.

And at the risk of sounding like an apologist, democracy is not the sole criteria on which to judge a country. Turkey holds regular elections, but still brutally represses the Kurdish population. In multi-party India, hundreds of millions starve.

Cuba, on the other hand, provides universal education and the highest standards of health care in the third world. It’s the only poor country I have ever seen that isn’t scarred by shanty towns. Even those locals that grumble most don’t dispute that. Havana might not by Heaven, but it isn’t Haiti either. It’s just that - not unreasonably - they want a system that provides them with toilet paper. Oh, and some fresh fish once in a while.

They are also envious of a layer in Cuban society that clearly does have plenty of cash. For instance, entry to Havana’s premier salsa spot costs more than a month’s white collar wages. Yet most of the several hundred strong crowd are young Cubans.

Some of them have jobs in the tourist sector. Bellboys can earn more than university professors, provided they are tipped in convertible pesos. And to get to be a bellboy - so I was told by a qualified architect currently working as a cinema usher - you need ‘connections‘.

Other obviously well-off people benefit from remittances from abroad. Havana is not immune from globalisation. Starbucks and McDonalds are unable to set up shop, thanks to the US embargo. But Benetton and some Spanish hotel chains are already running local operations.

Perhaps the clearest reason for socialists not to go starry-eyed over the place is the massive social weight of the Cuban armed forces, so typical for Latin America. That is probably the real significance of Fidel’s Castro decision to hand over power to kid brother Raul. Power stays with the guys that dress up in olive green.

Some commentators even suggested that what took place was actually a disguised military coup. If so, all I can say is that military coups are not all they are cracked up to be. No tanks on the street, no rattles of gunfire in the distance.

For the democratic left, then, the conclusions are clear. We should start from the position of opposing the US blockade on basic democratic grounds. Ironically from Washington’s viewpoint, it could actually be holding back the development of an indigenous Cuban democratic opposition.


But at the same time, we need to stress that a democratic opening is essential if Cuba is to avoid the build up of discontent on the scale of 1980s Eastern Europe, and the eventual introduction of a particularly savage brand of neoliberal capitalism.
tuff