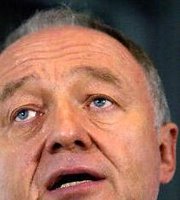 According to the McDonnell camp, an unofficial poll of delegates at this week's TUC conference – conducted by the Electoral Reform Society – has found massive support among delegates for their man.

A press release informs us that the results of the poll were:

Good news. Trade unionists account for one-third of the electoral college. But a slightly cynical reader has emailed me with some pointed remarks on John’s bid. McDonnell’s launch meeting in Manchester recently featured Tony Benn and Jeremy Dear on the platform … but not a single current member of parliament.

McDonnell does enjoy the en bloc endorsement of the Socialist Campaign Group, as I understand it. But I have yet to hear of any MPs individually offering their backing.

And John needs 44 people in the Parliamentary Labour Party to sign his nomination papers before he even gets on the ballot. Anybody got any information on this one?

Meanwhile, I am also reminded that Livingstone (pictured above) and McDonnell were on slightly less than comradely terms when they served together on the Greater London Council in the eighties. And yes, that is putting it euphemistically. But from what I hear, a Livingstone endorsement of Gordon Brown may soon be in the offing if a third challenger does not emerge shortly.

Meanwhile, in the comments box at Paul Anderson’s excellent blog people are batting some intriguing alternative scenarios around.

What if – and it’s just thinking out loud at this stage, of course – what if petulant Blairites decided not to stand against Brown, and backed McDonnell instead, on the grounds that they actually want Labour to lose the next election if the Pretty Straight Guy can no longer run the show? Could that be enough to give Britain its first Marxist prime minister?

Not such a far-fetched theory as at first it might appear. For a start, the Babyface Cokehead is probably more Blairite than Brown is. And don’t forget, a whole slew of Labour rightwingers voted for Benn before decamping to the SDP.