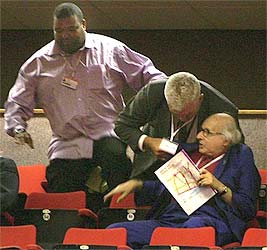 Leading Tory blogger Iain Dale – a sparring partner of mine since almost before the existence of the internet – reckons that New Labour apparatchiks are making sure that possible troublemakers won’t so much as get inside the conference venue this year. He doesn’t source the story, but he is sufficiently well-connected to be taken seriously:

‘Party staff have been instructed to draw up a blacklist of all the potential future Walter Wolfgangs [pictured left] and have banned them from the Conference. Several younger members have already had their application forms sent back despite having any kind of criminal record. Last year a woman of 70 had her pass taken away.’

Now why doesn’t this surprise me? Wonder what would happen if I applied for a press pass this year, as I did regularly up until 1994?