Labour NHS cuts: a gift to the BNP 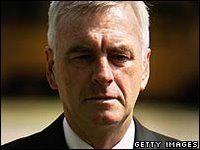 Labour’s massive plans cuts in the NHS – see earlier posts on the site – are playing into the hands of the British National Party, Labour leadership contender John McDonnell - pictured left - has warned.

For instance, one of the accident and emergency departments targeted for early closure is in Burnley. As McDonnell points out, such a move is a gift to the racist party’s efforts to build itself in Lancashire. Here’s a press release from his campaign team:

‘The BNP exploited the news that 600 health workers were losing their jobs in and around Barking in the run up to this years local elections and have tried to move in on hospital campaigns in Worthing, Sutton and Dover in the past few weeks.

‘"I am urging delegates to the party conference to give their full support to the Trade Union motion on cuts and privatisation in the NHS. It would be yet another kick in the teeth for Labour democracy if the motion is forced off the agenda.

‘"Not only is the current policy wrong but it is alienating core Labour supporter in areas as far afield as Burnley and Hastings in their hundreds of thousands and the racist BNP are moving in to exploit that anger at street level.

‘"When the Labour Party slides behind the Tories in the poll ratings on the NHS you know that you are in trouble and ploughing on with the cuts and privatisation programme under the guise of ‘modernisation’ is both electoral suicide and a gift to the fascists."’

He’s right. As things stand, the BNP is the only political force that consistently courts the alienated white working class, and rejects the kind of liberal wishful thinking that believes that class division has simply been administered away.

But instead of offering answers, the far right offers only scapegoats. It’s it the job of the far left to put forward the kind of consistent socialist and anti-racist politics that are the only means to check the BNP’s progress.