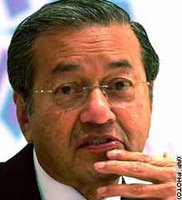 You can be forgiven for not noticing, but starting tomorrow, the Kazakhstan capital of Astana plays host to the second congress of World, Traditional and National Religions.

Those in attendance include representatives of the United Nations, the Council of Europe, and the European Parliament.

It is open to question whether they should be there at all, given reports of the official harassment of both Hare Krishna and Baptist believers.

But here’s the real clincher. Guess who will be guest of honour? Why, if it isn’t Mahathir Mohamad, former prime minister of Malaysia, pictured left.

That’s right, the same Dr Mahathir who in a 2003 delivered perhaps the most brazenly anti-semitic speech from a leading politician anywhere in the world in recent years, to the Organisation of the Islamic Conference, which was taking place in the Malaysian city of Putrajaya.

Here are some extracts. Fortunately it just stops short of an outright call for a second holocaust. Only read on if you have a strong political stomach:

‘It cannot be that there is no other way. 1.3 billion Muslims cannot be defeated by a few million Jews. There must be a way. And we can only find a way if we stop to think, to assess our weaknesses and our strength, to plan, to strategise and then to counter attack …

‘We are actually very strong. 1.3 billion people cannot be simply wiped out. The Europeans killed 6 million Jews out of 12 million. But today the Jews rule this world by proxy. They get others to fight and die for them …

‘They survived 2000 years of pogroms not by hitting back, but by thinking. They invented and successfully promoted socialism, communism, human rights and democracy so that persecuting them would appear to be wrong [appear to be wrong!] so they may enjoy equal rights with others.

‘With these they have now gained control of the most powerful countries and they, this tiny community, have become a world power. We cannot fight them through brawn alone. We must use our brains also …

‘Of late because of their power and their apparent success they have become arrogant. And arrogant people, like angry people will make mistakes, will forget to think.’

Mahathir’s presence underlines that this shindig is nothing but an farce, designed to whitewash the somewhat iffy human rights record of the Kazakh government. I only hope any rabbis in the audience lead a walkout.